D G Q Services Ltd have built bespoke test and interface equipment for our Automotive clients over many projects.

Some examples of these types of interface, originally built for the Tata 'Vista' EV, are shown below: 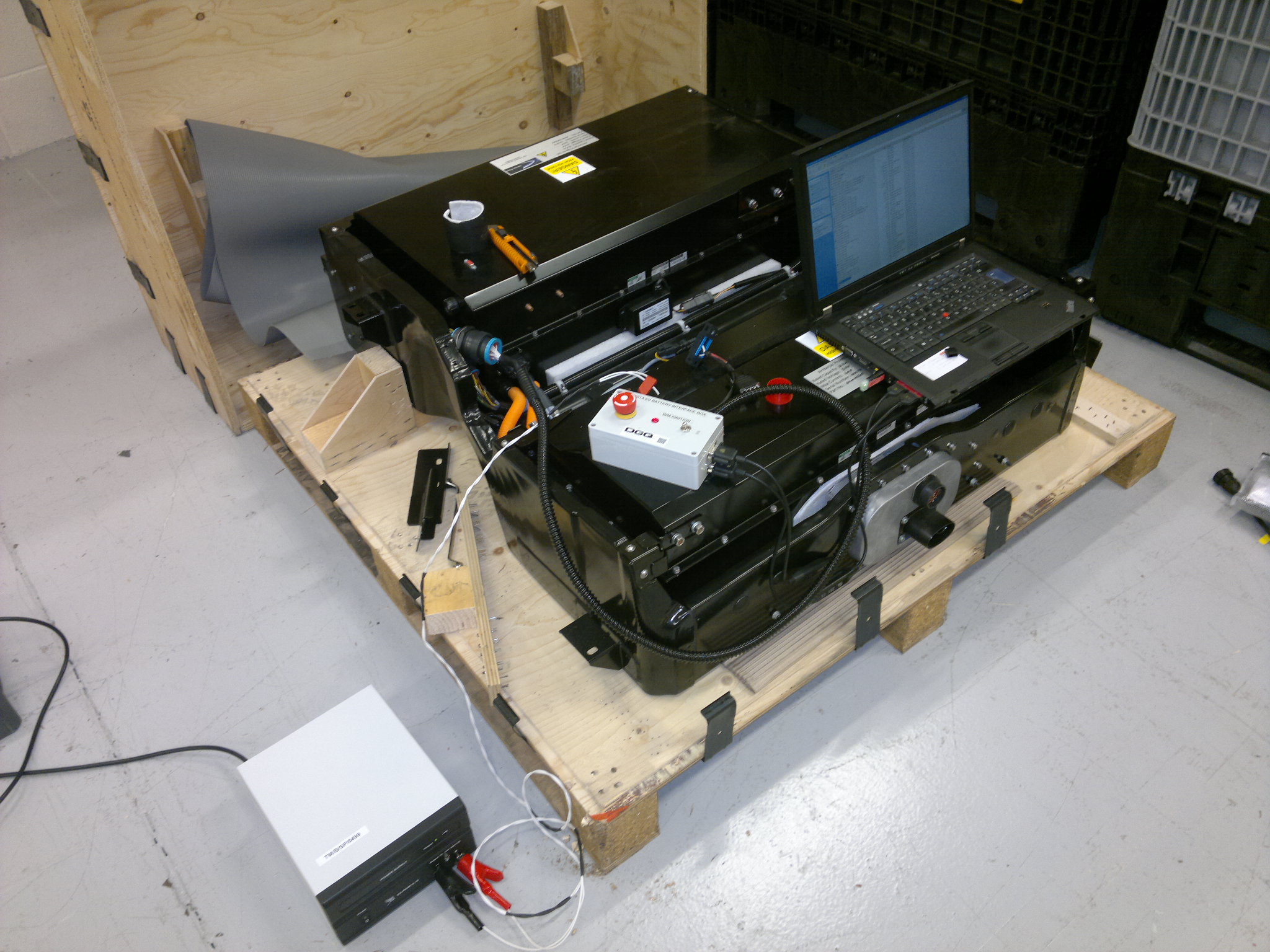 The box utilises interfaces to the battery communications connector and utilises Vector Canalyser and a dual channel CAN adapter to not only read data from the battery management system (BMS) but also send the CAN messages to the BMS which allow the Battery Safety Systems to close the main battery contactors to allow testing of the battery output.

Previously it was necessary to connect the battery to a fully functioning vehicle to engage the output contactors meaning that access to the main output terminals was prevented, or strip down the battery assembly to gain access to the output contactors directly, limiting the range of testing which could be carried out by trained and competent persons.

This set up meant that testing of battery packs could be carried out prior to the batteries being fitted on the assembly line and saved cost in terms of reducing rework or line disruption.

Another picture of the Battery Interface Box 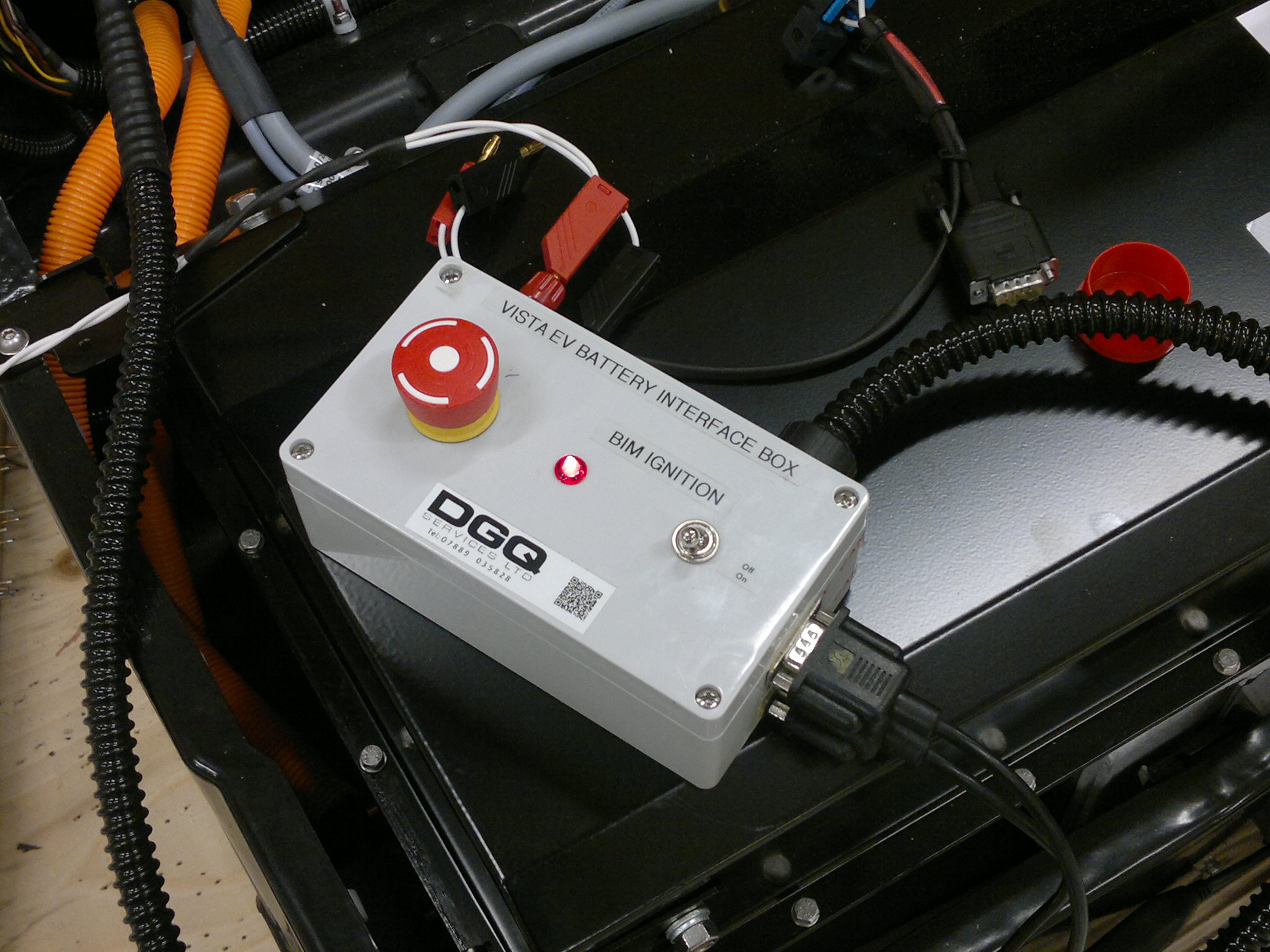 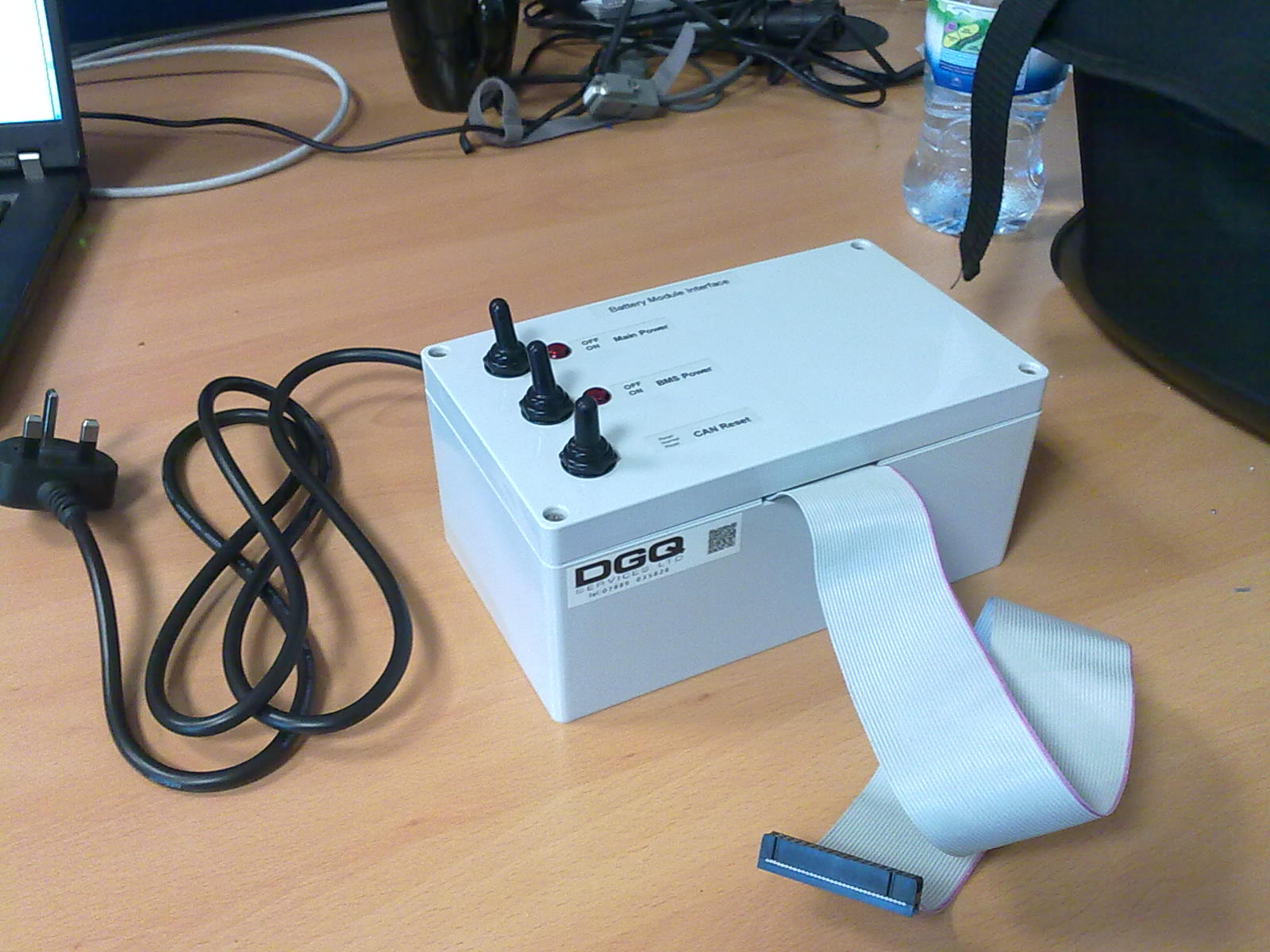 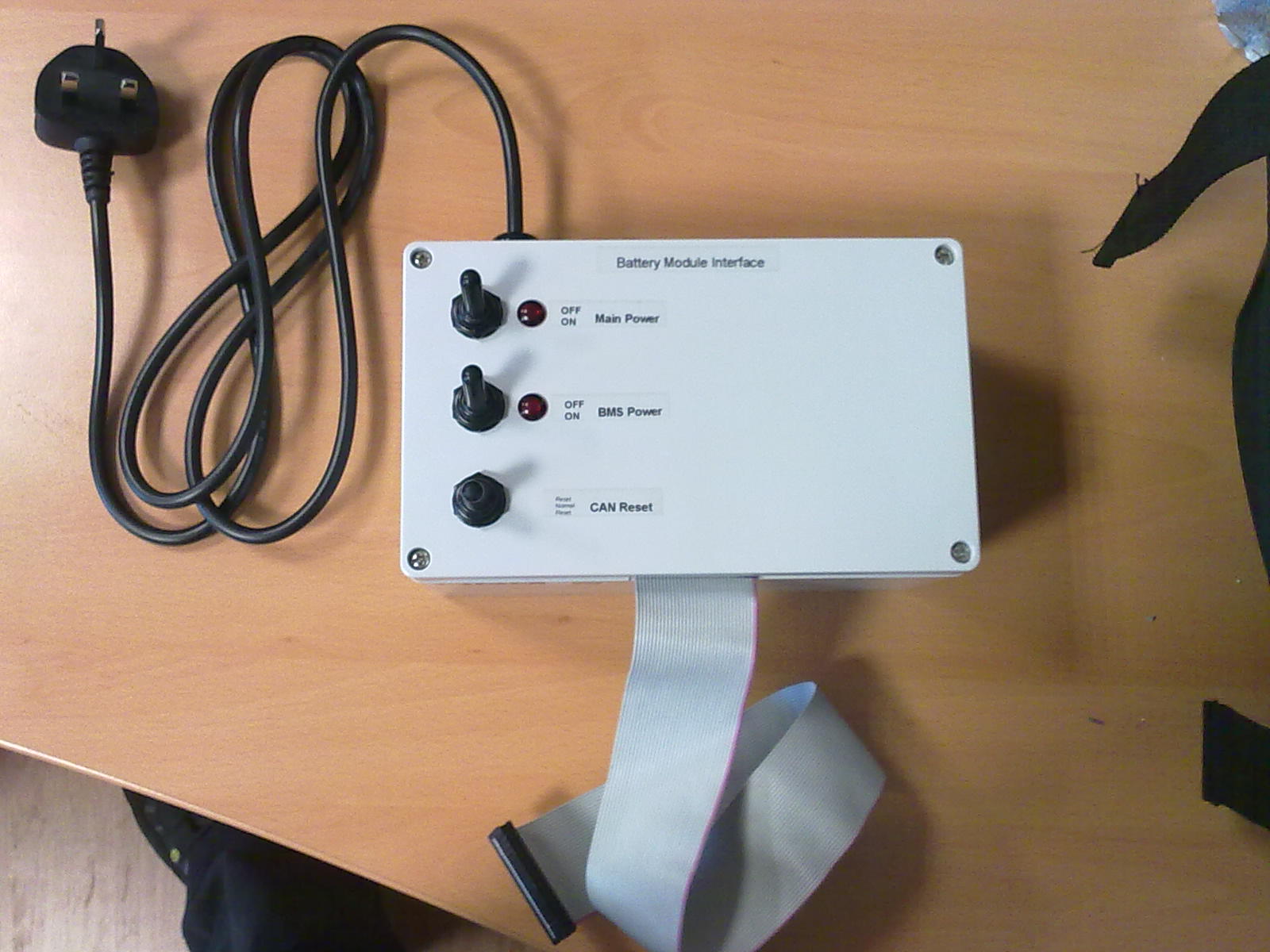 The BIM interface module was built to allow direct connection into individual clusters of Cells within the main battery or, more usually, into a cell cluster outside of the battery pack. This was to allow diagnostic work down to individual battery pouch level. The interface was able to connect into the battery cluster header using the ribbon cable show and to allow connection to diagnostic and programming software via CAN bus and RS232.

This particular unit was designed for bench use and contains its own mains (240 VAC) power supply.

This was another tool which D G Q Services Ltd. built having identified the need for the tool and the opportunities for cost saving for the client. 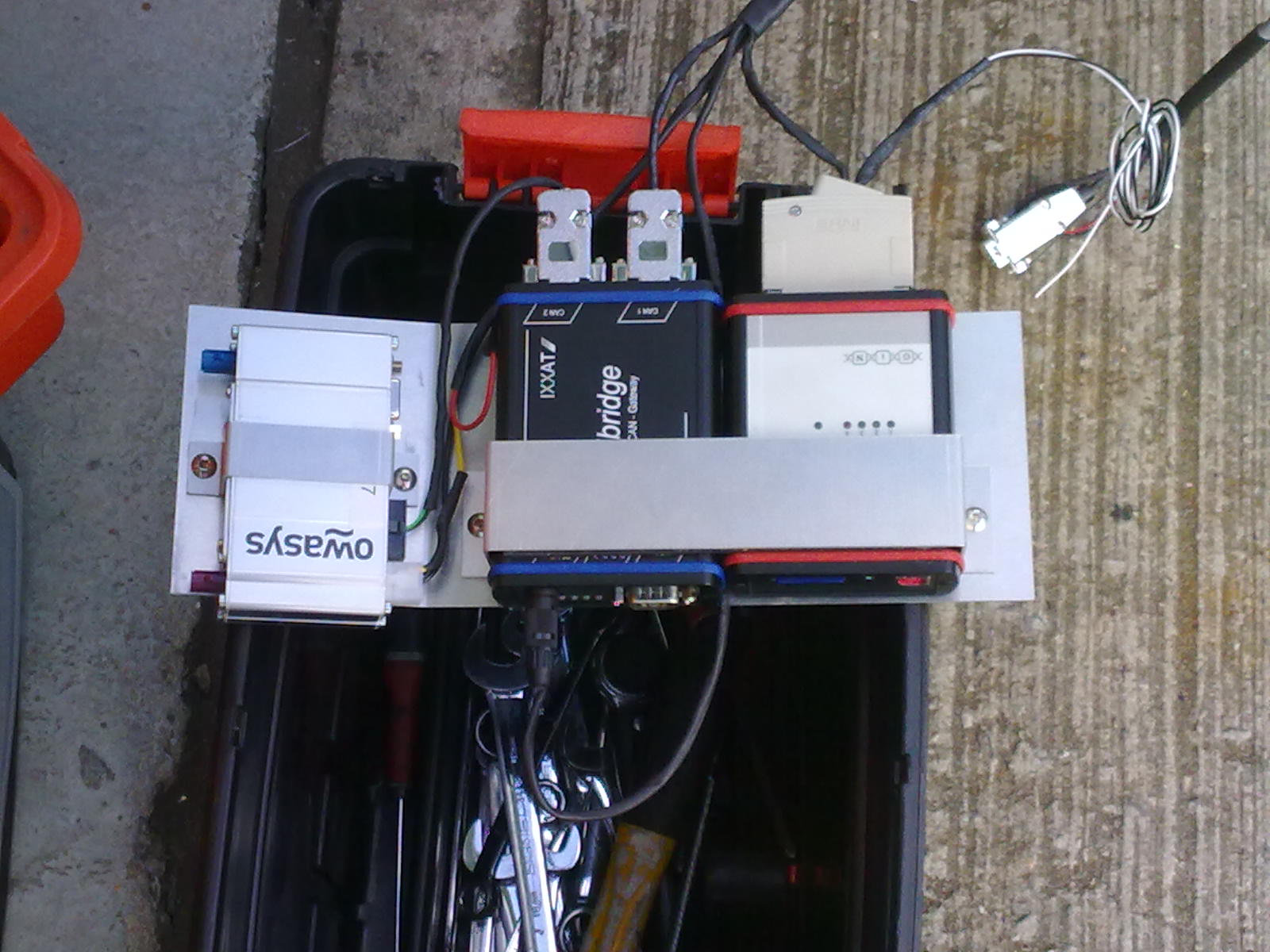 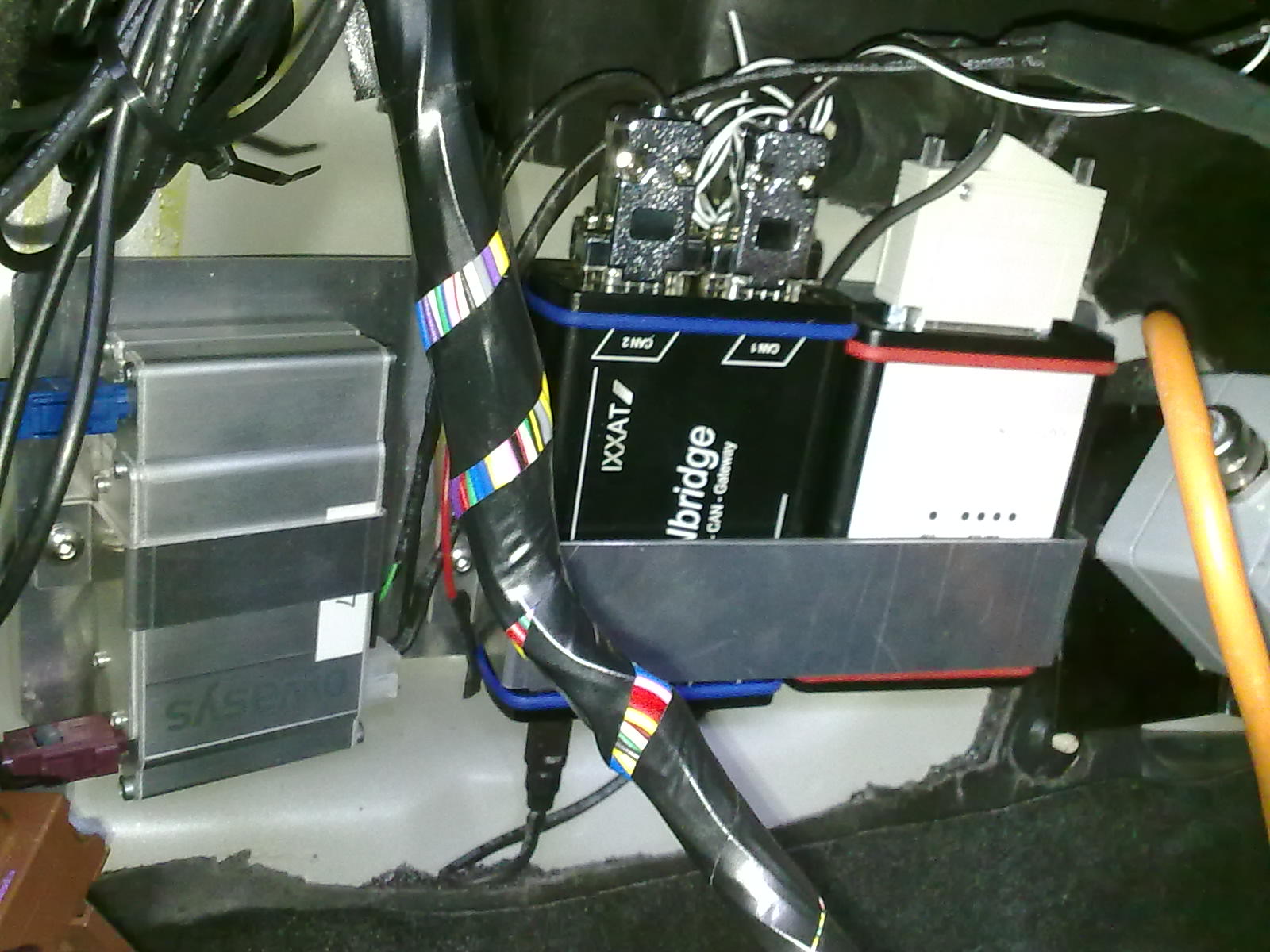 The Vehicle Usage and CAN Data Logger installation was designed, built and programmed by D G Q Services Ltd.

The client had a need to not only collect a months worth of CAN data for their own use, including GPS position and speed data, but was also required to provide certain CAN data to a central monitoring system for fleet analysis during a multi-manufacturer, large scale fleet trial.

The dual channel CAN bus data was, after suitable down-sampling, recorded on the Vector GL1000 CAN data logger.

The GL1000 was programmed using GIN Programming language, not the Vector Configuration Software as the Vector software was too limited in its capabilities and did not allow the full use of the loggers capabilities.

The IXXAT Canbridge was configured to take the GPS Position and Speed data from the Owasys GPS tracker and feed that onto the Vehicle CAN bus (which had a modified CAN Data Base loaded, reconfigured to accept the additional GPS Data) for logging with the other vehicle parameters on the GL1000.

The IXXAT Canbridge also took data from the Vehicle CAN bus and fed that to the Owasys GPS tracker unit. The IXXAT unit was also configured by D G Q Services Ltd. The Canbridge was required on the system as the client didn't want to have free access to the data on the CAN Bus by third parties. There was also a concern that, due to the two way communications capability of the Owasys unit, there could arise a situation where by unintentional modification of the Owasys unit by the third party could cause a large number of CAN error frames leading to the Vehicle CAN Bus shutting down and stopping the vehicle.

D G Q Services was responsible for carrying out a market review to find a suitable, cost effective, set up that would work with the Owasys GPS Tracker (which was mandated equipment for the fleet trial), would fit unobtrusively into the fleet trials vehicles, was robust and reliable and capable of logging and storing CAN data for the entire period between vehicle service checks, a period of around 28 days. We also designed and sourced the raft (Bracket and straps designed to secure the three units into the vehicle) designed and built the wiring harnesses and carried out the majority of the 28 vehicle installations.

D G Q Services wrote a 'How to Guide' for the Vehicle Service Technicians to allow them to download the data during the vehicle service, releasing and Engineer from this task. The guide also carried instructions to upload new configurations to the Vector logger as sometimes the Engineering Department would require short term, high speed data, to enable examination of a particular aspect of the vehicle usage or for fault finding.